Yes, you read that right. The HoverCarb. I'm patenting the name right as we speak, so when it does come to fruition, or someone steals my idea, I shall be a millionaire. And I then shall buy a Diabetes Island where we will all go to retreat, rewind and relax. We will never have to worry about babysitters because we can babysit each other's kids and feel totally fine. Juice boxes strategically placed all around the island. OK, I digress, but wouldn't that just be the bomb?!

My Hover Carb tells the carbs of a meal. Simple as that. Whether it's homemade or eaten in a restaurant. Someone would simply 'hover' the machine-like device over the meal, and voila, the carbs would be revealed. It could happen over a dish of ice cream, a full three course meal, a homemade brownie. And my HoverCarb would eliminate guessing. Someone could just whip it out, hover it and know the carbs.

I envision something like a magnifying glass, with a built in LCD screen. Wave it over the meal and you have a readout of the carbs in the meal. 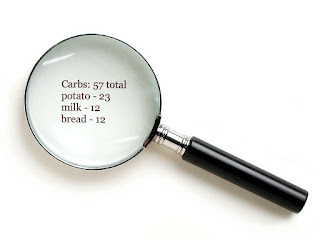 No more SWAGging.
No more guessing.

Sounds perfect to me. My favorite is guessing fruits - how do I know if this is a small, medium, or large apple?!

OMG that is perfect I so want to be the first to try your invention when it becomes reality. I would PAY BIG $$$ for that!!(shhh)

And that island... same me a spot lady!!

Awesome! I want one! And save me a spot on the beach of your island...

HOVERCARB is such a cool name, good thing you trademarked it already! love that it's free! :)

What a great idea! Love it! You would make so many D-peoples happy! =)

I love this idea! Makes me smile just thinking of having one. My brain is so tired from the constant math! :)