I remember thinking about milestones like this when I was in the hospital with her. I thought, what will it be like for her to live 5 years, 10 years, 25 years with diabetes? They were thoughts I entertained as other, more devastating thoughts lurked in the background. It was quite a shock, to find ourselves with a 6 year old with diabetes. It still is sometimes. The memory never quite leaves you of the day.

It was such a strange thing, to have her diagnosed. The moments themselves are clear in my mind, as if it happened yesterday. The parking outside the ER entrance, getting her out of her carseat, the walk in to the ER, the sheets on her hospital bed, her stuffed elephant she brought with her. I can make it all out in my mind. The hospital is close to us, and it's our go-to hospital for sickness and for visiting loved ones. I could lead a path right where we walked. I feel a rush of it all as I enter the hospital, each and every time.

Wouldn't it be something for me to have seen where she is now? I didn't know what 10 years with diabetes would do to someone, and do to a family. In some ways, it shattered us and forced us to rebuild. In many ways, it brought our love for Grace to the forefront, in fighting the battles she was at times too young to understand. It has led us to meet people we would not have otherwise met, and have the grandest times. I wish someone would have told me 10 years ago about those parts. I would have loved to hear it.

Grace is 16 now, and a teenager, and all it entails. She is girl-on-her-own, with a social life that rivals a pop star. She dances competitively on a dance team. She rocks the 11th grade. She has her sights set on college. She manages her diabetes with a pose that I surely would not have had. She gets ticked off with diabetes, and she also rolls with it. I marvel at all the times she packs up her diabetes kit, grabs a juice and a snack, and tells me where she is going and what time she will be back, not mentioning her diabetes once.

So, to the 6 year old Grace, who I thought was shattered by this diagnosis and would never do the things she wanted to, because it would hold her back, I want to say something.

You should see her now. She's glorious. 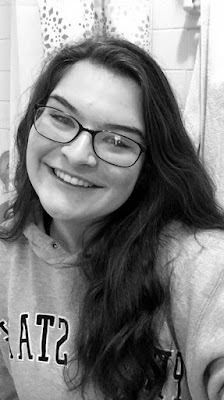 Grace is 16 now. There is less to write about regarding mothering her with diabetes, mainly because it is HER diabetes, not mine. I do my mothering in the background now, not so much in the forefront. She is a teen and manages on her own, with occasional help from me. The part I do still manage is everything associated with insurance. It's almost a full-time job in and of itself.

I saved Grace's vials of insulin in 2018. I wanted to see what it looked like for a number of reasons. One, to visualize it and two, to get at the cost of it all. Grace uses Novolog in her OmniPod pump, and has Lantus in the refrigerator as a back-up should the pump fail and she needed to do shots. Her prescription is for three vials a month of Novolog and one vial a month of Lantus.

Grace is not on private health insurance. In Pennsylvania where we live, she was eligible for Medicaid, as she has Type 1 diabetes. When she was diagnosed in 2009, she originally was on our private health insurance, but it was at the time insurers could kick you off if you had a pre-existing condition. When she was diagnosed in January of 2009, my husband's company was switching health insurances, and we had to submit that Grace had Type 1 diabetes. The company was Aetna and they promptly denied her health insurance. The state then picked her up through their CHIP (Children's Health Insurance Program). It turns out, children with diabetes are very expensive (!!!) and CHIP removed her in 2011, sending her to the state Medicaid program. She has been on Medicaid since 2011.

Let me be very honest with you, Medicaid has saved our family from bankruptcy and losing our home. On either of our private health insurance plans, the co-pays for medicines range from $20-$40. Grace currently has nine medications that would qualify. Every month. If we take the midline of the co-pay, that is $270 a month for co-pays alone each month. Doctor visits would be $50, and she sees the endocrinologist four times a year, that's another $200. Medicaid has no co-pays for medicines and no co-pays for doctor visits. She can stay on Medicaid until the age of 19.

It what I fear she faces after age 19. At this rate, the cost of living with diabetes is unsustainable. It's not only the cost of insulin, it's everything that goes along with it, from pump supplies to glucose tabs, to blood ketone strips to adhesive removers.

The most concerning, for me as her mom, is the rising cost of insulin. There are some great articles about the cost of insulin and what is happening. Here is one from The New Yorker. Here is one from CBS News.  Time. U.S. News. WebMD. And on and on and on. Do a generic search for 'costs of insulin' and up pops hundreds if not thousands of pieces about it. The costs is literally killing people with Type 1 diabetes. Again and again. It is unacceptable to me and to others. 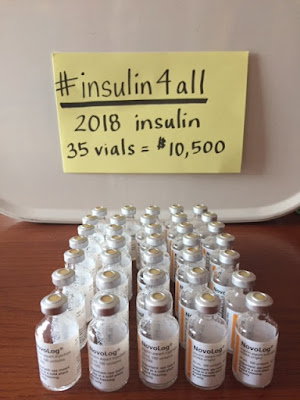 There is a movement afoot, and I encourage you to join in. The organization leading it is T1International. They are founded by people with Type 1 diabetes who work for the accessibility and affordability of insulin and diabetes supplies for people around the world. Their hashtag of #insulin4all advocates for affordable insulin for everyone. EVERYONE. Dr. Banting shared his patent for insulin for $1, so that it could be shared with everyone and keep them alive. Before his insulin, people with Type 1 diabetes died.

I fear we are coming full circle. If you cannot afford insulin, it's the same as not having access to it. What happens when her insulin costs continue to rise and she is not on Medicaid anymore? I'm not sure as a college student she would be able to afford her insulin. She has her family, but shouldn't she be able to access life-sustaining medicine at an affordable cost?

I urge you to become involved if you love someone with Type 1 diabetes. It truly is a matter of life and death.