It's July and that can only mean one thing - it's time for diabetes camp! This is Grace's 9th year at camp. Since her very first year of camp when she was 8 years old, she has only ever wanted one thing, to be a Counselor In Training (CIT). She applied in January and went through an interview process and was selected to be a CIT. She was beyond thrilled. Being a CIT means you get to attend TWO weeks of diabetes camp. One week is training at camp, and the next week is putting to use all the skills you've learned at camp.

And you know what else diabetes camp means? You are together again with your DBFF (Diabetes Best Friend Forever), the indomitable Lily! Lily also applied and was chosen to be a CIT too! 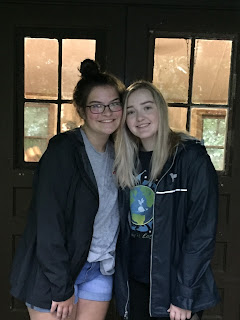 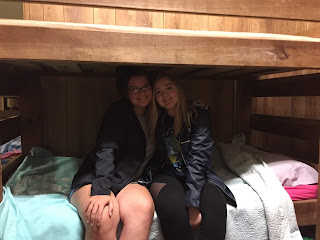 And when diabetes camp starts on the day of your 16th birthday, well, that's even better. Why? Because the whole camp gets to sing 'Happy Birthday' to you at dinner time, and your DBFF makes you a 16th birthday crown, which you wear proudly. 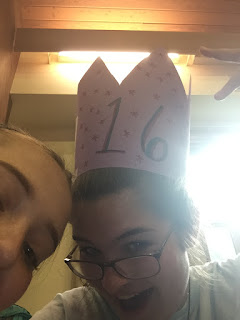 As a CIT you get to do a lot of the 'grunt work' of the camp, as you are learning how to be a counselor. Everyone takes their turn being the lowest gal/guy in the ranks. We have all been there, done that. I told Grace to suck it up and do what is asked of her. She ended up liking all that was asked of her, even serving the campers meals appealed to her after a while. She also got certified in CPR while she was at camp, BONUS! She learned how to set up games and events, talk to campers about BGs, help others learn to carb count and watch counselors run groups and activities.

As a CIT, you get to help check camper's BGs at 12 am and 3 am. I might have chuckled a little when she told me this on the drive home. She said 'OMG Mom, I am sooooooo tired!' My only comment was '10 years honey, 10 years' and she looked at me and said 'I know, I thought of that!' The night time checks are fewer now, but for years, my time was 2 am. I am still recovering from the sleep deprivation.

She loved the younger campers. She said they reminded her of herself when she was 8 and 9 years old. She said 'Mom, one girl was just diagnosed 10 months ago, and here she was at a diabetes camp. She told me she LOVES it even more than Girl Scout camp. She said she finally had other friends who had diabetes!' Grace said she welled up. She remembers being that little girl. Not a soul did she know when she went at age 8. I remember dropping her off, thinking 'What have I just done?' I hope the mom of that young girl knows that she found her tribe here at camp.

Now that she learned all these skills, she goes back for the second week of camp! During the second week of camp, she puts all she learned to use, in a cabin with campers along with a counselor. She is home for a week, getting all things cleaned and getting lots of sleep right now. Then, she is back at a different camp run by Setebaid Services next week. I literally just wash it all up, then repack with Grace.

I asked her if she had fun. She said she did. I asked about her friends. She said she was glad to see them. The most telling part was when we arrived at camp and entered through the camp sign. 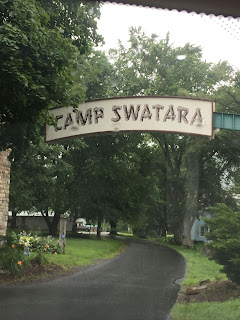 And here's all you need to know about the friendship of Lily and Grace. 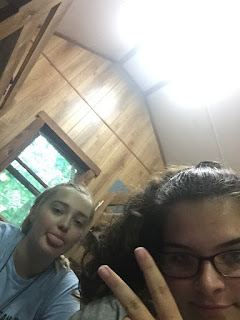 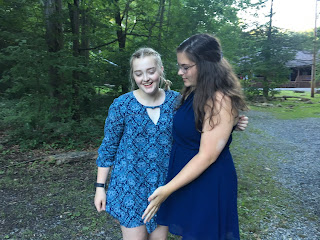 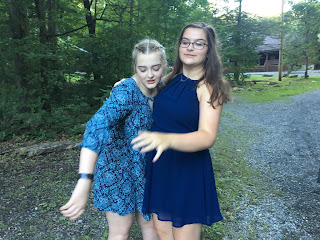