Evidence of the low

Grace had one heck of a low last night. She was smooth sailing along at a steady 104 BG, heading straight east arrow, on the Dex. I had just looked at it about ten minutes before it happened. Then, she walked into the room. With those eyes, I can always tell by the eyes. The ones that say 'I'm a little dizzy and starting to go out of it, I'm looking around for something but I don't know what...' THOSE eyes.

"I'm feeling a little dizzy" Grace says, as she holds her PDM, strips and 'pricker.'

I press on Dex's little button and up pops 54 BG, with a south arrow. Yeah, the one that points straight down into hell. Cause that's where you are about to go with a low that comes on this fast.

Literally, looking at the Dex graph dots later, it looked like she stepped off a cliff from 104 to 54.
50 point BG drop in about 10 minutes. Whoa, that's some kind of ride.

Did your heart just stop? Cause mine did when I saw that on her PDM. The lowest she has ever gone was 27 and it was not pretty at all. 31 I have never seen, and would like never to see again.

Then it happens in slow motion. Grace lays down on my bed and says 'I am really dizzy' and I grab the Juicy Juice that sits in her room, tear off the little straw and puncture it into the little box of juice. All that happens in 5 seconds. She slurps it down, while I open the glucose tabs and hand her two grape ones. She puts them in her mouth and starts to munch, only she tells me that she needs to lay down to chew.

I run downstairs and grab a banana, and a Clif bar.  I know she will eat these.

She wolfs down the banana and the bar. And lays there, opening and closing her eyes steadily. I lay down beside her and hold her hand, stroking it, telling her how lovely she is, how wonderful she is and how it will all be over soon. That the numbers will go up and she will be OK, sometimes it takes a few minutes.

"I'd like half a peanut butter sandwich, and some more juice."

I run down to make the quickest sandwich I can and open another juice. She eats both, sitting up this time, slowly chewing the sandwich. Proclaiming it the best sandwich in the whole world.

As she eats, I write it down, to remember the carbs. Cause with my gal, these carbs will add up, and in an hour or two, she will be sky high if I don't remember what she ate and start adding it up.

So far we are at 90g carbs.
It's been about 20 minutes. Grace rechecks and she is 77 BG.
We lay down and talk, and recheck in about 15 minutes and she is rolling with a 114 BG.
I turn back on her basal insulin in her pump. I give it the respect it deserves.

And with everything in my being, I give her 45g of carbs 'free' in that I don't dose her for them, but I ever so gently input that she had 45g to eat and I hit 'enter' on her pump. Giving her the thing that sent her to the 31 in the first place. 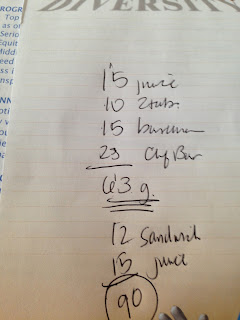 Camp Victory, we have no words. We wait and wait and wait for you all year. The countdown to diabetes camp starts, well, the day after the previous year's week ends. Literally. Grace will say 'Only 364 more days until camp.' Do you know the countdown that needs to happen to count down for an entire year? On second thought, you probably don't want to know. It's looooooooong.

This is Grace's 4th year at camp, and as she puts it 'It's the best week of my whole year, Mom.' And I truly believe it is. Our family would plan a trip to Disney, and if it was the same week as diabetes camp, Grace would choose diabetes camp, hands down. It beats the ocean, Disney and an amusement park, all rolled into one.

She finally moved up to the 11-12 year old cabin. The pink cabin, Sassafras. I love the picture that captures the Sass, because truly it fits. 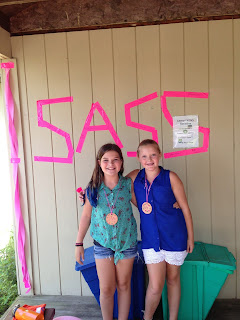 And of course, the t-shirts rocked. Sweeties with Betes, indeed. 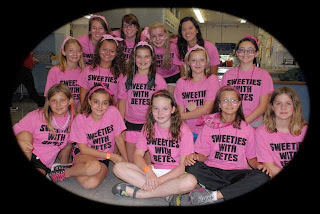 And of course, there is Lily. Lily is the very reason that Grace loves camp. ONE ENTIRE WEEK with her best friend, or as Grace puts it, 'Mom, she's my DBFF, and like my sister.' And they are, two peas in a pod. Outgoing, funny, kind, smart, caring, listeners, and best of best friends. They found each other at this very camp, four years ago. And it was like capturing lightning in a bottle. There had to be a reason we sent Grace to camp that year, and Lily's parents sent Lily, and they ended up in the same cabin, and by the end of 6 days together that first year, decided they were best friends forever. Right from the beginning, to click with someone like that, and only be 8 years old. That's pure lightning, right there. 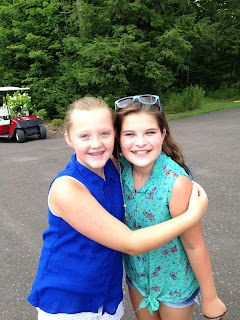 They swam, they campfired, they ziplined, they ate, they tested, they treated lows, they made mugs in arts and crafts, they went on hikes, they joined the polar bear club and jumped in the pool early one morning. They communed, they made new friends and most of all, they were part of a community that cares deeply about it's members.

There is nothing in the world that comes close to the closing ceremonies, where counselors, leaders, campers, staff and directors of camp sing the closing song 'Waltzing with Bears.' And as they sang it, the words resonated with me:

There's nothing on earth that Grace won't do, so she can go to diabetes camp, put her arms around her peers living with Type 1, sway in time to the music, and sing.