Happy New Year everyone!
Ok, now sit down. I mean it. Sit. Down.
Then read this: 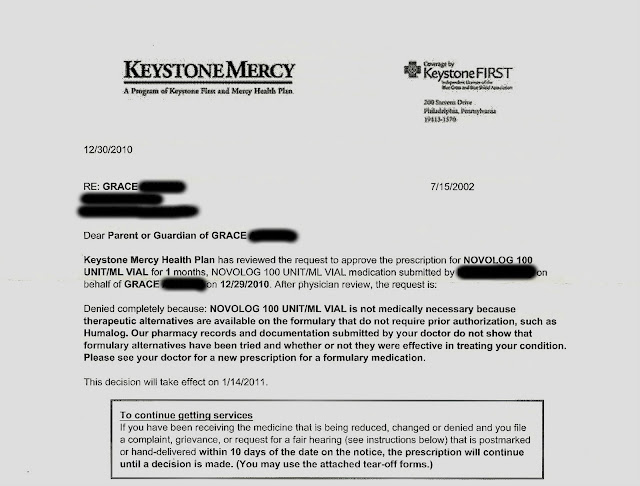 Did your head almost come off your body? Steam from your ears? Or is your jaw still on the floor?

And you know the sole reason that Keystone Mercy decided this???
You guessed it folks. 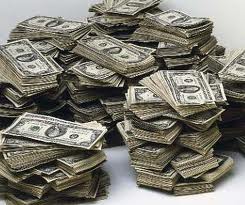 Money was the sole reason they made this decision. Novolog costs more than their formulary.
Not for one minute do I believe that they have Grace's best interests and healthcare at heart.
They didn't consult her endo.
They didn't consult her primary doctor.
They didn't call me.
They didn't read her files or ask for her history.
They didn't call her CDE.
They didn't look at how long and how successful she has been on Novolog.
They didn't look at her A1C or her blood sugars.
They didn't look at the difference reported between Novolog and Humalog.
They even go so far as to say that she has not tried 'formulary alternatives' which means she didn't try what they have rostered as the lowest-costing insulin they can get.
Oh, poor Keystone Mercy.
Monday morning - a complaint AND a grievance are being filed against Keystone Mercy.
Monday morning, the 'BitchSwitch' that my dear friend Kelly coined, is being flipped!
Monday morning, I am calling a lawyer at the PA Health Law Project.
It's so ON.
1-3-11 update:
* Complaint/grievance sent certified mail to KMHP
* Complaint/grievance filed over the phone
* Left case manager at KMHP left a scalding message on their voicemail
* Endo on board and sending letter in support of Novolog
* BitchSwitch flipped
* Head still on body, surprisingly
Posted by Penny at 6:50 PM

HOLY SHIT! I swear this companies are criminal!! They used to tell us we could use humalog and novalog back and forth. That they were the same. They are not. Give em hell! Keep us posted!

Holy Shit is right. That was just what I was thinking... Oh Penny... I'm so sorry. Why must we always have to fight so hard to keep our kids healthy? Ugh. Well... Go get em, my friend. And know that you have an ARMY of D Mamas behind you! You're so right... It's ON like Donkey Kong!

I guess what frustrates me is why does so many things have to be a "fight"...why can't some things be easy for "d" fams?

Penny I am sorry. Grace is so lucky to have you advocating for her. And...like Hallie said we have your back sistah!

Has your endo written a letter of medical necessity to the insurance company? That is what I have found to "fix" most of these ridiculous problems that we face.

yeah, jaw on the floor, steam coming from my ears!!

Bring the fight on... we all got your back on this!

Can't wait to hear how you mop the floor with this piss-poor insurance company!

We just had our insurance do something similar with test strips. I haven't had the time or energy to call them up and yell. You've just given me the kick in the pants I needed. Thanks!

You go girl! Grace is so lucky to have you as her momma pancreas to advocate for her best interest! I hate that we have to fight for so much for our kids. I'm in your corner!

Go Penny! I want to say I can't believe it but..I can. Insurance companies are pure evil...

Holy Moly, how shitty. Of course, we are all just using insulin for cosmetic reasons, right? Sooo cool to have your child injected all the time.
Keep calm and steely-hearted. they are trying it on and many would crumble and accept it. Lots of this stuff really shocks me when I read about it as the system here is so different. I understand that these comPanies ae businesses but I bet their profit margins are sickeningly high.
I have to add that I would have loved to be a fly on the wall when that steam flew out of your ears!

Penny -
Call them to the curb and let everyone know about it!
Keep that "Bitch Switch" on full throttle & continue to fight!!
HUGS!!
Kelly K

Thanks for fighting the good fight for all of us - I'll be watching to see how this one goes - please let me know if there is anything I can do to help....

Write letters, e-mails, etc to let them know of my displeasure - I'd be glad to but I'm not on that insurance so I'm not sure my letter would carry much weight but I'd be glad to help if you think it would!

Good luck Penny. I hope the bitchswitch works and works quickly. It's all about the money. It shouldn't be. :(

Last year our insurance made us switch from Humalog to Novalog. I thought Novalog was cheaper!

I'm NOT saying that what they did was ok...fight like the mama bear you are! But, when we switched, we didn't notice a difference with the three boys. Just to put your mind at ease. But seriously...isn't Novalog the cheaper one? I'm so confused!!!!

OMG I am so angry!!!! Give them HELL and we all have your back!

Steam did not come out of my ears. But that's ONLY because this happened to me and my parents about 10 years ago. I was switching from NPH and Humalog to Lantus and Novolog. The wonderful insurance company sent us a letter saying that Lantus was covered, but Novolog was not deemed medically necessary. Instead I could use Humulin R. Not even Humalog. Which I was already using. My dad (the calmer of my parents) called and explained the situation. Several times. It was finally approved. It's pathetic how little insurance companies care. I hope your bitchswitch works! Good luck to you guys!

Looking forward to hearing how it turns out. We switched from Humalog to Apidra. However we switched because in NZ Humalog doesn't come in a disposable pen...and a giant pain the booty. But we had no issues with Humalog. In the end though, the companies should allow you the choice much like the do on other medications.

I don't even have words for this. Why fix what isn't broken? If Novolog is working, then you shouldn't switch. Can you get an override to continue using it? Our insurance company has a diabetes coordinator. Do you have someone at the insurance company to act as a liason like that for you?

Holy CRAPTASTIC! WTF? WTH? OMG!
I'm so sorry you are having to deal with this CRAP! UGH! I really don't even have the words!

Let us know if there is anything we can do to help. D-Mama letter writing campaign? My bitch switch flips easy - let me know!

My head is tilting off my shoulders...please update ASAP.

I just discovered this myself. Turns out the formulary for all the companies in the PA medicaid system is drawn up by the state. So switching to another medicaid plan wouldn't help. When I lost my job I joined the VA system. I dropped out of the VA system because they almost killed me, and so I went into the state system, and find this out. This economy better improve soon, cause prices on meds just keep going up.

So? You're mad that the state will cover insulin?! If your daughter has diabetes, she needs insulin to live! Be happy that it is covered!

Hey Anonymous, I'm not sure you understood the whole point of this post. Medicaid only covers the insulin THEY select, Humalog. My daughter, who indeed has Type 1 diabetes and needs insulin to live (gee, thanks for the reminder, I didn't know that!) uses NOVOLOG.

Am I mad they only cover one insulin? Yeah, you can see that from my post about it. I am happy I was able to obtain WHAT SHE NEEDED rather than what they think she should have.

And next time, have the guts to post your name on comments like this. Belly up to the bar.