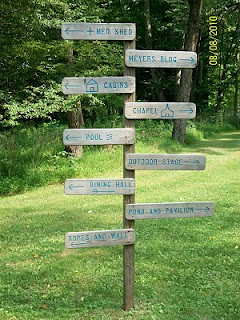 Grace returned from diabetes camp a week ago. You can read about her return here.
I told you all out there in the DOC that I would grant an interview with the gal herself, so here goes:


Tell me about camp...
Fun. Awesome. Want to go next year.

What was your favorite part of camp?
The swimming, the zipline into the tree! and boating!

Least favorite part?
I don't have one.

Tell me about the cabin award you got...
I got the 'Little Miss Sunshine' award cause I am always smiling. 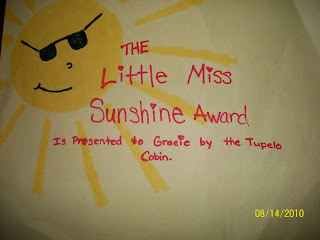 Any lows at camp or in your cabin?
Yeah, L hit a low of 29! She had to drink like 3 juices. I hit 49 and had a juice and some nutter butter cookies.

Tell me about your cabin and your bunkmates...
Awesome cabin. They were nice, funny, cute and helpful.

What did you learn about diabetes?
I did learn some stuff but I forget it. No, wait, I did learn how a pancreas stops working, I learned that.

What was it like being among so many people with diabetes?
Really cool.

How was the food at camp?
I liked it. I had cinnamon toast - Mom, you never make cinnamon toast, you gotta learn how to make it. They had turkey one night, but it wasn't Thanksgiving.

Did you do your own carb counting?
I had to stand in line, get my folder, decide what to eat, write down the numbers, get checked by the nutritionist that that was ok, then they sign off, then I can dose myself with the PDM. I added them up on a paper. 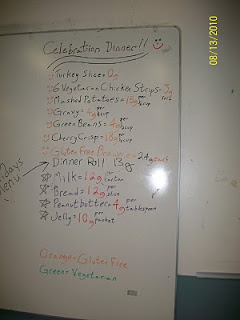 Anyone else wear the OmniPod?
A counselor did! He showed me his arm, I think it was his arm.

Would you go back next year?
Totally!!!

Favorite memory of camp?
Meeting friends. Going into the cabin which is cool. Campfires. Zipline. Swimming.

Closing statements Grace?
I had nice counselors, but I also did miss my mom.
Yeah, we're done. 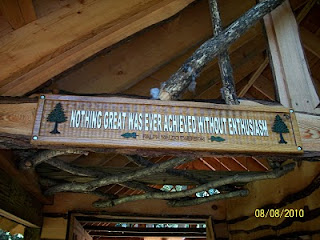 What a neat idea to do an interview with her for your blog! LOVE IT!!!

Sounds like she had a blast! I am really looking forward to when Sugar Boy can have that experience! (Don't get me wrong - they thought totally scares the you-know-what outa me, but I know HE will love it!)

It sounds like so much FUN!!! I am so happy for Grace to have so many fond memories of her first Camp experience.

AWESOME POST!!! Love the interview and LOVE hearing so many awesome answers!!!!

A zip line? How awesome! Sounds like she had so much fun, and is glad to be home with Mama.

I'm so so glad she loved it. I got all teary eyed just thinking about it. I think we get a little more...enmeshed with our kids because of the constant care required. I can't imagine being away from Emma for that long - was it liberating for both of you?

SO HAPPY Gracie loved dCamp!
And I'm not surprised she won "The Little Miss Sunshine Award," because girly girl makes me smile every single time I think about her!!
HUGS
Kelly K